In the second quarter of 2019, two Grade B buildings entered the market, FLC Twin Towers and Leadvisors Tower providing around 29,000 sq.m, NLA. Both buildings are in the West area making this submarket continue to be the major office supply hub of Hanoi with 50% of the total office stock as at Q2 2019. Hanoi office market still observed healthy performance in both Grade A and Grade B. Asking rents of Grade A buildings in this quarter posted an increase of 5.3% y-o-y, achieving US$26.4/sq.m/month (exclusive of VAT and service charge). Similarly, Grade B’s average asking rents increased by 4.6% y-o-y reaching US$14.3/sq.m/month. In terms of vacancy rates, Grade A’s vacancy rate declined by 1.7 ppts staying at 8.2%. Meanwhile, although there was new supply during the quarter, Grade B vacancy only increased by 2.6 ppts reaching 10.6%.

During the review period, Hanoi office market saw relatively strong demand, primarily from local IT/Tech and flexible office providers with net absorption of 21,500 sq.m. Among industries, IT/Technology sector was recognized as a key demand driver, accounting for 27% of the total leasing in 1H 2019. Existing tech firms expanded rapidly, while new Japanese and US tech firms sought spaces for their new office.

Approximately 260,000 sq.m is expected to be opened during 2019 - 2020. Providing that new office buildings are in the major office clusters either in West or Midtown and healthy leasing demand across sectors, rental rates are expected to continue to increase in both grades. On the back of strong demand for build-to-suit model, flexible workspace is forecasted to expand strongly from 2H 2019 and become a major source of demand for traditional office space.

H1 2019 recorded a remarkable figure for new supply of Hanoi landed property market with 3,241 units being launched, primarily due to a strong Q1. Impressive sales performance is achieved during the reviewed quarter despite the massive stock of new launches, which indicates the improving market sentiments for landed residential properties in Hanoi. Approximately 2,980 units were sold during the first six months of 2019, which is 14% higher than the total number of sold units recorded in the whole 2018. 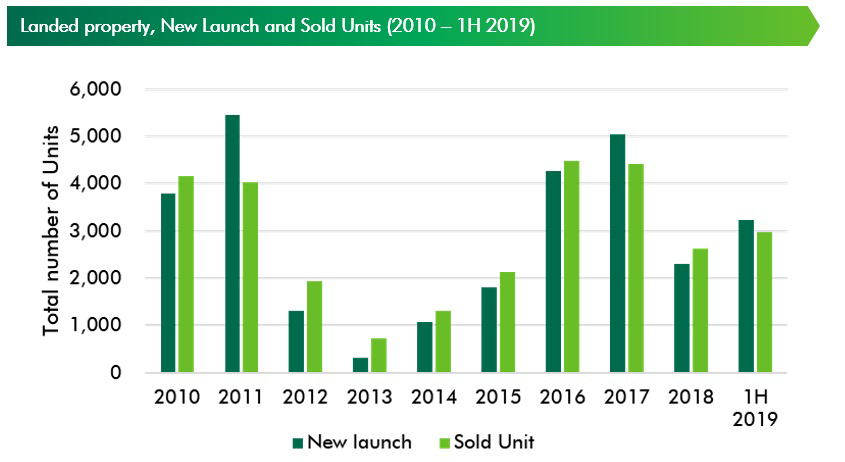 Improving inner-city linkage continues to foster the expansion of Hanoi landed property supply to emerging locations. There has been a major shift of new supply in terms of location, with the East now accounting for approximately 80% of total new launch during the review period. While total supply remains predominantly captured by the West, movements further from the core districts to more suburban areas are being clearly witnessed. Not only does better infrastructure enable the opening of new projects in non-traditional areas, but also help revitalize townships that were previously under delayed constructions. Progress has been seen at certain projects to the West of Hanoi, with developers announcing their plans to complete undone constructions and fully deliver high-quality residential developments. Upon the relaunching of such projects, we are expecting to welcome greater expansion of the supply for landed property in Hanoi.

In terms of market performance, secondary price for villas in Q2 2019 averaged US$4,075 per sqm, with VAT and construction costs all included. Having achieved a healthy growth rate of 3.9% q-o-q and 2.2% y-o-y, the figure also returned to the US$4,000-level for the first time after 2 years. This is mainly attributed by rising villa prices in emerging locations such as Gia Lam, Ha Dong and Long Bien – areas that are benefiting from bettering infrastructure system and the entering of renowned developers. 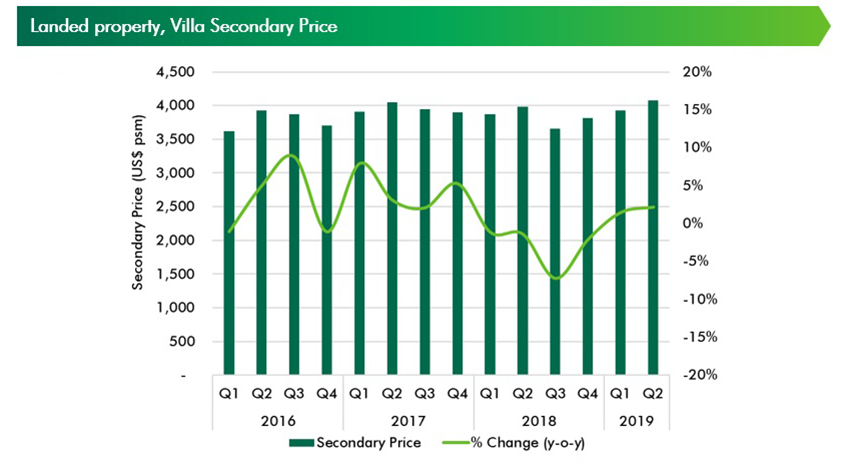 The recent establishment of many large-scale projects have further intensified the competition within the supply of landed property in Hanoi. Looking into the remaining months of 2019, high quality products, consistent management and reputable developers will remain key factors affecting both end-user buyers and investors. 2019 is also set to welcome a great volume of new supply in the landed residential market with many following phases of previously launched projects are expected to come onboard.

In Q2 2019, there were approximately 6,400 units launched in Hanoi leading to a total new launch during 6M 2019 of around 17,700 units – one of the busiest 6M periods recorded. In terms of segment, mid-end and affordable dominated the market covering 98% of total new launch. There were only two high-end projects launched in Q2 2019 in Tay Ho area. Sales momentum were relatively positive in Q2 2019, with more than 40% of units launched during the quarter having been absorbed. In Q2 2019 there were a total of 6,900 sold units, an increase of 17% y-o-y. Active sales activities and good construction progress from both townships and standalone projects have contributed to overall positive sales performance during H1 2019.

In terms of pricing, selling prices in the primary market in Q2 2019 averaged US$1,337 per sq.m, an increase of 4% y-o-y. Compared with the same basket last year, prices only slightly increased by 1% y-o-y. Noticeably, high-end segment recorded an average pricing level of US$2,345 per sq.m – the highest pricing level of this segment observed over the past five years.

Moving forward, the level of new supply is expected to stay at above 33,000 units in 2019 – a relatively similar volume as seen during 2016 – 2018. Mid-end segment continues to dominate the market with forecasted share to new supply of around 70% - 80%, pointing out that Hanoi market is end-users-oriented. However, products from some township developments have started to draw attention from local investors. While the urban districts are getting more and more crowded, it is expected that residential supply will move further and further away from the 10km radius of the CBD. Township developments will be the major source of supply providing advantages in terms of integrated amenities and product diversifications. Given the improving infrastructure and recent partnership among major corporations, it is expected that these projects will draw more market attention in upcoming years.

The first half of 2019 ended with four new retail projects at emerging locations in non-CBD area. As a result, the total retail supply increased by approximately 65,700 sm to just over 930,000 sq.m. Two new projects, Vincom Plaza Skylake and Vincom Center Tran Duy Hung, are located in the major retail cluster of Hanoi – Midtown and the West – accounting for just over 60% of total supply in the market. The remaining new projects, Sun Plaza Ancora and Sun Plaza Thuy Khue, added around 29,900 sm NLA to the North and the South. Looking into the second half of 2019, two new retail projects are expected to come online with total scale of 80,800 sm, including Aeon Mall Ha Dong and FLC Twin Towers, reaffirming the leading position of Midtown and the West as a major retail cluster.

Ground floor rents in CBD picked up slightly in Q2 2019, reaching US$100.7/sq.m/month, up 1.6% y-o-y and 0.7% q-o-q. As no new supply in CBD is expected to open in 2019, average asking rents in this area will continue to post positive growth in the coming year while vacancy will continue to stay as low as below 2%.

Ground floor rents in the largest retail supply cluster, Midtown and the West increased to US$31.0/sq.m/month in Q2 2019, up 6.2% y-o-y, as the market continued to see more high-quality supply from reputable developers in this area. Vacancy in Midtown and the West stood at 8.3% during Q2, down 5.6 ppts y-o-y and 1.1% q-o-q. Ground floor rents in other non-CBD area grew moderately by 3.4% y-o-y to US$25/sq.m/month whereas vacancy up by 2.7 ppts y-o-y to 9.4% with the openings of two new projects by Sun Group, Sun Plaza Ancora in Q1 and Sun Plaza Thuy Khue in Q2. 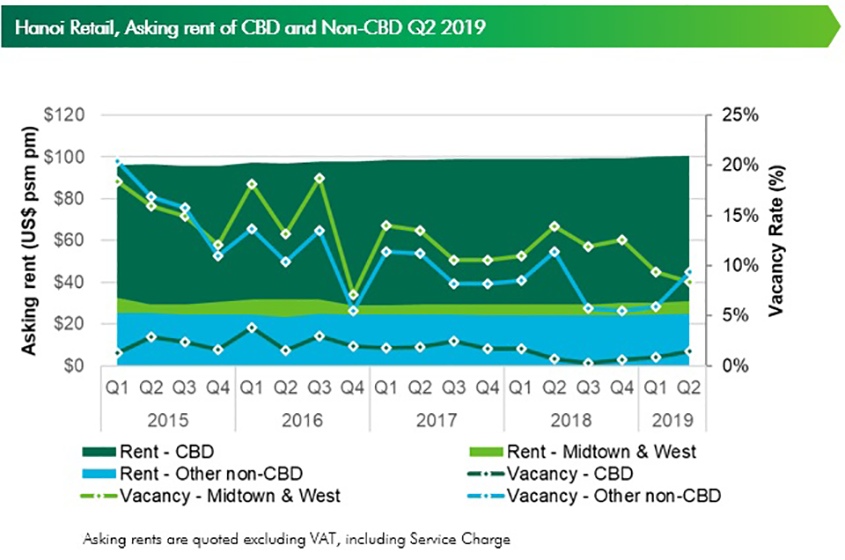 On the demand side, Vietnam market experienced very positive consumer sentiment with the Consumer Confidence Index peaked at 129 after reaching similar level in Q3 2018. More importantly, the rising effect of e-commerce and millennials’ changing shopping habits are expected to reshape the future of retail in general and the local market of Vietnam in particular. New shopping malls should be expected to have modern design and focus on customers’ experience while bringing technology into delivery services and online platform. The active convergence of online and offline retail strategies is forecasted to strengthen in the near future to boost retail sales and at the same time attract potential consumers.

Looking back, there has been a contradictory scene of success and struggle among retail stories in Vietnam during the first half of 2019. While various F&B chains continued to outperform and keep expanding in the local market, supermarkets continued to see the consolidation trend with the exit of French supermarket chain Auchan, who sold its portfolio to locally owned Saigon Co.op. Earlier last year, Vingroup also acquired Fivimart chain from Aeon group, making it the supermarket leader in Hanoi. In March 2019, online fashion arm of Central Group, Robins.vn, was announced suspended, following the closure of online website vuivui.com operated by Mobile World in December 2018.

Covid-19 outbreak has created many disruptions in Vietnam’s economy and its real estate market. Vietnam’s manufacturing sectors is heavily dependent on raw materials. Disruption to supply has forced many local producers to temporarily cease production since January, leading to a very low growth in exports in Q1 2020.
View detail

The shortage of new supply was recorded again in the third quarter of 2019 in the ready-built villa and townhouse segment despite high expectation for the launch of large-scale projects. However, due to many unexpected reasons, these projects have been delayed until the end of 2019.
View detail

Amid the prevailing global high uncertainty and growth slowing down, Vietnam’s economy still achieved stable growth with 6.8% in 1H 2019. As of Q2 2019, the GDP growth reached 6.71%, slightly lower than the Q2 2018 rate yet still higher than the growth of the second quarter during the 2011-2017 period.
View detail

Due to limited supply in the 1H 2019, HCMC real estate inventory overall was absorbed. Sales momentum continued to be positive in Q2 2019 with more than 80% of new launch units having been absorbed. Office market performance with vacancy rates of both Grade A and Grade B slight decrease.
View detail

In line with the geographical diversification real estate supply emerging locations such as Ha Dong, Gia Lam, Hoai Duc and Long Bien were observed. The market has witnessed strong demand from both local and foreign investors for projects at locations close to industrial parks "The East".
View detail

Due to the impact of the delay in licensing process of new projects and the decreasing clean land bank in Ho Chi Minh City, developers concentrate on product with high value. Decreasing inventory together with limited new supply are leading to active secondary market.
View detail

According to Global Consumer Confidence Survey by Nielsen, Vietnam’s Consumer Confidence Index reached 122 points, ranked fourth in the list of the most optimistic countries in the world. This challenge is likely to continue in the coming year with limited new supply in central business district.
View detail

Leveraging opportunities from stable domestic demand and increasing foreign interest, especially in HCMC and Hanoi is rising due to high pace of urbanisation. Additionally, the steady growth of population average 2% per annum each city as seen over the past five years will drive constant housing demand.
View detail

Vietnam’s two largest metropolitan areas expect to welcome a wave of new supply, of mostly Grade B offices, in 2019. The expected supply growth in 2019 of 13% and 11% in HCMC and Hanoi, respectively, will shake the office market for the first time after a quiet period.
View detail